Twins have babies on the same day

Twins That Do Everything Together

Twin sisters were a double blessing when they were born 20 years ago, and they have continued the tradition by having babies themselves -- and on the same day. 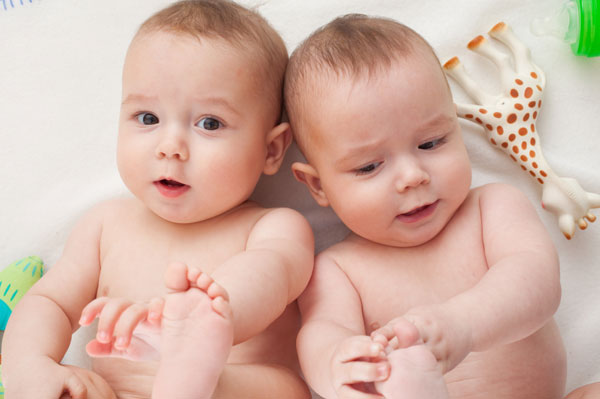 Kayla and Kortney Dutton, twins from Overland Park, Kansas, have always done everything together. Their lifetime of doubling up continued on Monday when they both had babies within hours of one another.

Monday night, Kayla’s son Jax was born, and an hour and a half later, Kortney’s daughter Nevaeh made her entrance. The twins, who are identical, shared a hospital room and had their own newborn photos on display. The new moms even said that the babies looked alike. "It helps a lot that the person you've done everything with your whole life being in a situation the same as you, something that life-changing," Kayla said

The babies are closer in age than the sisters are themselves, who were actually born on different days and thus do not share a birthday -- although growing up, they shared almost everything else. They will continue to do so as they recently bought a house together and anticipate that the babies will be more like brother and sister than cousins.

It’s not easy to conceive twins on your own -- about one out of every 30 pregnancies is a twin pregnancy. Your chances increase due to several factors:

Age. The older you are, the more likely it is that you will ovulate more than one egg at once.

Fertility drugs. Drugs that stimulate your ovaries to produce and release more eggs means that you’ll have a higher chance of multiples.

Heredity. If you are a twin or there are twins in your family, you’re slightly more likely to have twins yourself.

History. If you already have a set of fraternal twins, you may have a greater chance of having another set.

Heredity seems to make more of a difference if the twins in the family are fraternal as opposed to identical, like the Dutton twins. No matter what, I think it makes for a really cute birth story.

Twins catcher Joe Mauer expecting twins
Why older women are more likely to have twins
Are you pregnant with twins -- or more?