Posted in The Hatch Blog / news
Rate this Article:
Tweet
Pin It

Chris Routly, a dad from Breinigsville, Pennsylvania, has launched a petition to encourage diaper manufacturer Huggies to reconsider its ad campaign. Keep reading to learn what he finds so offensive. 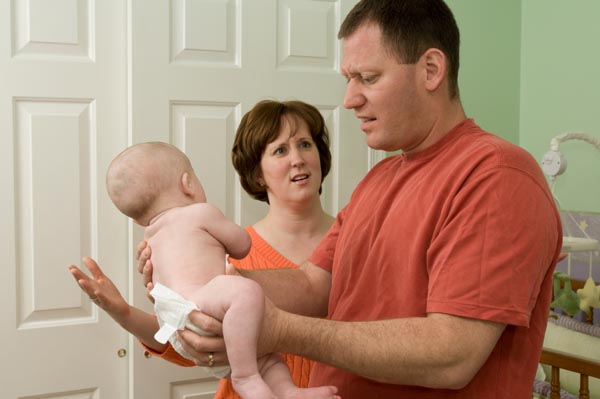 "I'm a dad of two young boys, both still in different stages of diapers," Chris Routly writes on his change.org petition, We're Dads, Huggies. Not Dummies. "Because I am lucky enough to be a full-time stay-at-home dad, I'm not just the one selecting and purchasing what brand of diapers our family uses, but also the one solely responsible for 'diaper duty' between 7 a.m. and 5 p.m., Monday to Friday, and am on tag-team duty with my wife the rest of the time."

"Although full-time at-home dads like myself are still statistically few in number, I'm not alone in being so often responsible for the task: according to the 2010 U.S. Census, approximately one in three dads regularly acts as their child's primary caregiver, while their spouse works, in a two-parent household."

When mom's away, dad's a "babysitter" -- according to the Census Bureau >>

What is Routly talking about? Huggies newest ad campaign, the Dad Test, implies that if it Huggies work for dads, they're good!

Routly quotes the voiceover from one Dad Test commercial: To prove Huggies diapers and wipes can handle anything, we put them to the toughest test imaginable: dads, alone with their babies, in one house, for five days, while we gave moms some well deserved time off. How did Huggies products hold up to daddyhood?"

Is Huggies bagging on dads?

Routly asks the following questions in his change.org petition:

And then he answers them himself: "No, Huggies, dads don't do that," he writes. "Poor manufacturing does that. A large bottle before naptime does that. Feeding your kid too much fiber does that. Babies do that. But dads don't use diapers and wipes any differently than moms."

Huggies took to its Facebook page to defends its Dad Test campaign. "We appreciate the discussion about our commercials, and wanted to give you a little background. Huggies recruited real Dads and their real babies to put our diapers and wipes to the test. Why? Because we love Dads. Many of us are Dads! And like Moms, we change diapers, wipe messes and are hands-on participants in raising kids. Yes, we could've done the Mom Test. But for the first time, we felt that Dads deserved to be celebrated just as much."

While many Facebook fans agreed, others weren't convinced. "But your commercial showed dads putting a sports game as a higher priority than their own child. That's why we're mad at you. Or at least why I'm mad," one dad wrote. "I would never put anything before my child. When I'm home with her and she is awake, she is of utmost importance to me. I don't care what's on TV... Shame on you Huggies."

Another made his point by flipping the scenario: "Can you imagine the outrage had you showed a mom on the couch watching soaps while her child stewed in a dirty diaper? We are simply tired of the negative stereotypes. The phrase 'give dad some Huggies and watch the fun' suggests that dads are too stupid to diaper. I will be spending my money elsewhere."

What do you think about Huggies' Dad Test ad campaign? Is it an insult to dads or are moms really better at diaper duty?

Diaper changing 101: Making it through the first week with baby
The new wave of cloth diapers
The dirt on diapers