Can the nicotine patch cause colic in your baby?

Feb 21, 2012 12:00 PM by Laura Willard
Posted in The Hatch Blog / Pregnancy
Rate this Article:
Tweet
Pin It
Ditch the nicotine 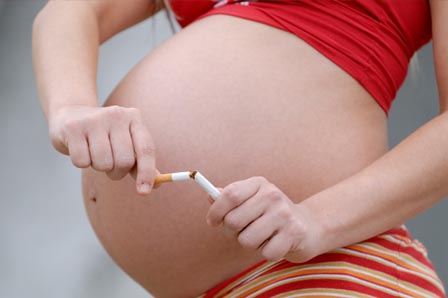 New research shows that smoking and/or using the nicotine patch during pregnancy could result in a colicky baby. Need another reason to kick the habit? Here it is.

Smoking could
cause colic, too

The new study involved researchers looking at data on interviews with over 63,000 moms. The interviewers talked to the moms during their pregnancies and six months after their babies were born.

The study, published online Feb. 20 and in the March issue of Pediatrics, concluded that a woman who either smoked or used nicotine replacement therapy -- or who did both --  during pregnancy were more likely to have a colicky baby.

The researchers found the following:

As for the relationship between colic and nicotine during pregnancy, Dr. Jennifer Wu, an obstetrician-gynecologist at Lenox Hill Hospital in New York City explained it to Health Day: "The theory is that there are nicotine receptors in the GI [gastrointestinal] system and nicotine receptors that alter serotonin, and these alterations affect the babies after birth, causing colic."

Nicotine replacement isn't recommended during pregnancy by the Centers for Disease Control. Neither is smoking. If you're a smoker and are thinking about our attempting to become pregnant, talk to your health care provider immediately so you can find a way to quit before you conceive. If you're pregnant and smoking, stop. See your doctor, but know that you must quit immediately. Your baby's health depends on it.

More on smoking during pregnancy