Posted in The Hatch Blog
Rate this Article:
Tweet

Do your kids suffer from motion sickness -- either car sickness, air sickness or both? Whether riding in a car, in an airplane, or on a boat, some babies and young children are struck with the sudden urge to purge. Here are a few tips to help your little ones deal with motion sickness when trying to get from point A to point B.
Michelle Bruns Maffei 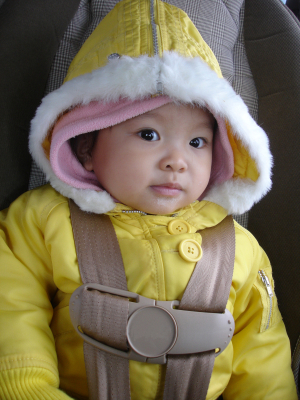 Motion sickness, also known as car sickness and air sickness, occurs when the brain receives conflicting signals from the eyes, inner ears, and joints. According to the American Academy of Pediatrics (AAP), it is not known exactly why motion sickness happens more often in some small children than in others, but usually improves over time. In addition, the AAP also reports that children with a history of motion sickness develop migraine headaches as they grow up, so be aware that this pattern may occur in your youngster.

Signs and symptoms of motion sickness
To help your child deal with this yucky feeling, you’ll need to know what to look for before he tosses his cookies. If you are on the move, here are a few signs that his lunch may be on the way back up:

However, babies can suffer from motion sickness, too. So, even when the smallest passenger is unable to express what he feels, look for the following signals to know when to grab a bag and pull over if you can:

What you can do
Fortunately, there are steps you can take to stop motion sickness in its tracks, or at least minimize the effects. At the first signs of motion sickness, you can:

If your child heaves despites your best efforts, settle her tummy with a carbonated beverage and some soda crackers. A little nap will also help the queasy feeling pass, hopefully allowing her to sleep until you reach your destination!

Moms share their motion sickness tips
Here are some tried and true methods that have worked for a few parents:

“My daughter used to throw up every time we’d go somewhere,” says Stephanie Szilagyi of Crestline, California. “I figured out that I cannot give her dairy if we’re getting in the car; I still live by that rule to this day.”

"I use the Ginger spray for my son; he has gotten sick since he was a baby,” shares Misty Pinkerton, Huntington Beach, California.  “And, now he chews the Ginger gum but I always keep the spray in the car.”

Poor Matthew hates to ride in the car - at least shortly after he's had a bottle. I feel so bad for him. Yesterday, he screamed and cried so much, he threw up. I wonder if he has motion sickness or if it's just the position he's in in the car seat. He's a big boy and has almost outgrown his Graco Snugride. We're going to try him in a Britax Roundabout later today. I hope he'll do better. The pediatricians said to try an ounce of chamomile tea with a little sugar or some Mylicon.
-Cleo68 from the SheKnows message boards