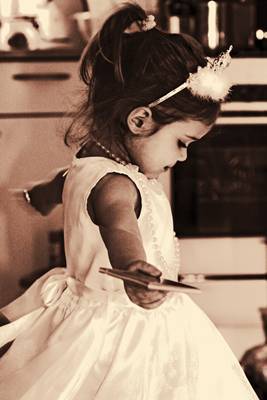 Psychologist Dr. Satoshi Kanazawa of the London School of Economics tracked 17,000 British babies from their 1958 births (that's a long study) and later on when the kids were 7 years old he had their teachers rate their looks (seriously). Later still, those kids grew up, and at age 45 the ones who had been rated as the "most attractive" by their teachers were also the folks most likely to have daughters, not sons. Wow. It's makes me pretty happy to know research cash is being spent on useful stuff! This study will actually be published in an upcoming issue of the journal Reproductive Science. According to reports at msn, Dr. Hugh Taylor, editor of Reproductive Science, notes that this topic will likely, "Push a few parents' buttons." Um, yeah. For one thing, how is this helpful to parents? Secondly, if I had to go by a teacher's word on what's attractive vs. what's not, I'd be very leery. Teachers, in my experience tend to like the kids who listen, listen well and get good grades. Their attractiveness meters could be very influenced by this. Maybe these findings represent that. We don't really know do we? Beauty is so much in the eye of the beholder. In any case, do with this info what you will, but I'm guessing you shouldn't go picking an unattractive mate, simply because you want a boy (or vice vs.). Somehow, I don't think it's quite that simple. What do you think when you see nonsense studies like this?