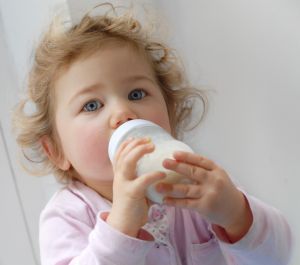 If you've got a bottle addicted baby what can you do to help him break the habit and switch to a sippy or real cup? Use good timing: It's smart to choose a low-stress time to halt the bottle. Don't try to ween your child off his much beloved bottle on the day your tot starts a new daycare or when you bring his baby sister home. Pick a time that's typical; boring even. Make the cup fun: Take your little one to the store and allow him to choose between some various baby cups. Get fun cups with bright colors or cute designs. Make it a BIG deal: The cooler a cup sounds, the more likely your little one will want it. Talk about how awesome it is to drink from a cup. Point out other kids his age with their own sippy (peer pressure). Discuss the cup in "Big boy" terms, such as, "You're sooooo big to drink from this sippy!" Give a treat: Use your baby's bottle for boring fluids only, like water or milk. In the amazing sippy cup allow some juice. Of course you won't always give just juice in a sippy, but eventually your tot will see the sippy in a yummy positive light. Don't be mean or sneaky: Taking away all your little one's bottles in the dead of night or telling him he's bad for using a bottle won't help - it will make him extra resentful of you and his cup. Go at a slow pace and make the cup a reward not a punishment.