Baby movement milestones - what you can expect

Feb 15, 2009 11:02 AM by Jennifer Chait
Posted in The Hatch Blog / Baby
Rate this Article:
Tweet
Trying to figure out when that little guy of yours is going to get mobile? Below is a guide... 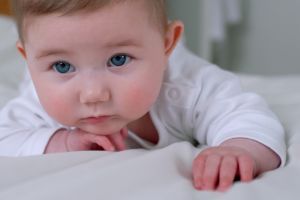 Trying to figure out when that little guy of yours is going to get mobile? Below is a guide to all things baby movement. In general babies reach movement milestones at around the same time (during the time frames listed below). However, keep in mind that time frames baby-by-baby do vary. The following are guidelines, but not set in stone milestones. Baby movement milestones: Rolling over: Most babies learn to flip over by about the age of 2 or 3 months; usually from their tummy to their back. Later, at about 5 months of age your baby will master the harder back to tummy flip. Sitting up: Between the ages of 4 and 7 months is when most babies learn to sit up. At first your baby will need assistance. True sitting up won't happen until your baby has control of his head and neck muscles. Babies can progress from holding their head up (while on their tummy) to a small push-up, to sitting rather quickly, but he won't likely be able to sit up without any props (his arms, a pillow) until 7 months plus. Crawling: Between 6 and 10 months your baby will start to wiggle about more. He may rock on his hands and knees, shimmy around, or scoot before he crawls. Cruising: Cruising happens after your baby learns to stand up (around 8-13 mos). While standing your baby may hold onto the coffee table or wall while taking a few steps at a time. At first most babies drag their feet but eventually they learn to pick up their legs. This is the start of walking and it's known as cruising. Walking: After cruising comes the walking stage. Somewhere between 9-14 months babies take their hands off the coffee table, wall, or sofa, and try to go it alone. Babies are uneasy at first so expect some falls - you can make it easier for your baby by allowing him to go barefoot and by baby proofing (i.e. table corners). Note that not all babies follow this same pattern. Some babies skip a stage or skip back and fourth between stages for a while. For example, many babies don't ever crawl and some babies (like my son) practically skip the cruising stage and go straight to walking. How mobile is your baby right now?