Nursing your baby - common breastfeeding lies you may hear 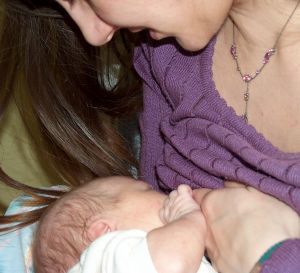 The new formulas are just as good as breast milk: This is not true. Breast milk is perfect nutrition for your baby, and there is no formula that compares. True, formula has come a long way, and provides good nutrition, but it's not the same as breast milk. If you don't breastfeed you suck as a mama: Plenty of excellent mamas don't breastfeed for one reason or another. While I believe you should at least try to breastfeed, I also believe that it's impossible to say what's right for one mama vs. another. Your baby can still be healthy if you don't breastfeed. Your baby will still adore you, and you're still a good mama, even if you bottle feed right from the start. If other mamas harass you for not breastfeeding trust me, they're rude, and not worth your energy, just ignore them. I will add this - the major reason that women don't breastfeed is a lack of support. Make sure you get support before giving up on breastfeeding altogether. You'll lose all kinds of weight breastfeeding: I've met VERY few mamas (including myself) who actually lose pounds and pounds DUE specifically to breastfeeding. It could happen sure, but what's more likely is you'll lose baby weight by eating right and exercising. Breastfeeding multiples is impossible: Not true at all. Many women successfully breastfeed mutliple babies. It's harder for sure, but no where near impossible. Breastfeeding comes naturally: Um, no. I have seen women that it seems easier for, but I'm not sure it's fair to say it comes naturally. Personally, I had worked as a doula, read every breastfeeding book known to man, and helped other women learn to breastfeed, and yet, when my own son was born, it was WAY harder then I thought (to the point of tears during the first week). It was tough, but I got support and learned. After a while I could breastfeed, vacuum, and write emails at the same time, but it wasn't like my baby popped out and I knew just what to do. Breastfeeding always hurts: There is sore, and then there is pain. Pain during breastfeeding is not ever normal, and don't let anyone tell you it is. Your nipples may be sore at first, but that's normal because it's a change you're not adjusted to yet. If feeding your baby actually hurts, as in you dread doing it, one of three things is happening. One, you're feeling some pain because your uterus is contracting back to it's normal size - this can hurt, but it shouldn't hurt excessively, and it's a normal thing that needs to happen. Two, you're feeding your baby incorrectly, which you can fix with help, or three, you have a breast infection which can only be helped with medical treatment. If you have pain while feeding, see your doctor or midwife. What breastfeeding myths have you heard?