How to quit smoking while pregnant

Mar 03, 2014 9:00 AM by Michelle Maffei
Posted in Pregnancy / Pregnancy health and wellness / Pregnancy stress
Rate this Article:
Tweet
Pin It

With the January 2014 Surgeon General's Report on Smoking and Health citing 108,0000 pregnancy and birth-related conditions linked to infant mortality and low birth weight, you may be more determined than ever to kick your nicotine habit to the curb. But, before you go cold turkey, check out these tips on how to quit smoking while pregnant. 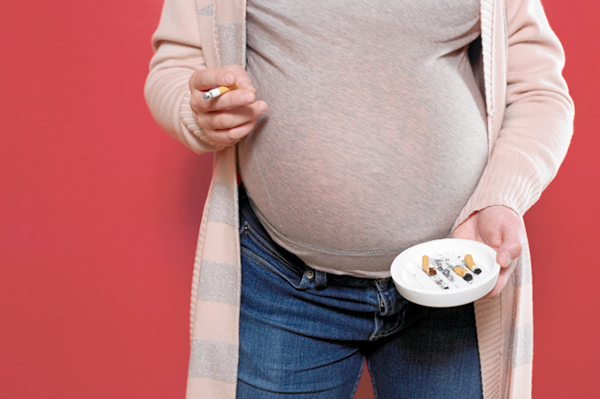 "Symptoms ... are the most difficult in the first two weeks of quitting."

Tossing your pack and swearing off cigarettes is an ideal way to avoid the risks of smoking while pregnant, but, "the side effects of quitting during pregnancy can range depending on whether you're a light or heavy smoker," advises Dr. Alyssa Dweck, OB/GYN and healthy mama brand medical advisory board member, "but can include restlessness, jitteriness, irritability and in severe cases seizures can occur." The good news is that most of these symptoms you experience won't cause harm to your baby-to-be and often are the most difficult in the first two weeks of quitting. The American Pregnancy Association recommends that you increase your chances of success by listing the benefits of quitting, changing your daily habits, building a strong support system and setting a quit date.

Gradually cutting down on your cigarette usage until you've kicked the habit completely can be easier then quitting cold turkey — especially for heavy smokers — but the key is to quit smoking as soon as possible. "Although smoking cessation in the first trimester is recommended, literature shows that there are fetal benefits to smoking cessation throughout pregnancy," explains Dr. Melissa Goist, OB/GYN, Ohio State University Wexner Medical Center. "It is never too late to get a mother to stop smoking for her benefit as well as her children and unborn children." This method of quitting smoking while pregnant may minimize nicotine withdrawal symptoms in the first couple of weeks.

"Nicotine may still affect your pea in the pod's health."

Quitting smoking while pregnant is oftentimes just as much of a habit as an addiction to nicotine, so turning to nicotine patches and gums can help you dodge withdrawals while you quit smoking. "For women who are pregnant who have been unable to stop on their own, and other alternatives... don't prove effective, the American Congress of Obstetrics and Gynecology's position is that patches and gum may be an option, of course after extensive counseling with the patient by her physician," shares Dr. Kecia Gaither, Brookdale University Hospital and Medical Center. "[Although] the use of the patch or gum for smoking cessation during pregnancy have not been sufficiently evaluated to determine their efficacy or safety, [the benefits] of using patches and gum to quit smoking while pregnant are that mother and fetus are not exposed to toxins and curative agents in cigarettes, decreased nicotine exposure to fetus and no secondhand smoke exposure to others in the home." However, nicotine may still affect your pea in the pod's health, especially with overuse, so consult with your physician before reaching for nicotine replacement methods.

Prescription medication, such as Bupropion, have helped many smokers quit the habit, however research is light when it comes to taking it while pregnant. "There are different medications that have been tried over the years, both in pregnancy and when not pregnant to assist in smoking cessation," reports Akua Afriyie-Gray, M.D., OB/GYN, Loyola University Health System. "Currently there is no decisive evidence that medications are significantly effective to help quit in pregnancy." Pregnant moms with high-risk pregnancies — such as preeclampsia or history of seizures — should avoid these types of medication methods.

"The resolve of the individual makes the difference regardless of method chosen."

While there are many methods for quitting smoking while pregnant, Dr. Afriyie-Gray asserts that the most important element in your journey is to seek support. "The most effective method as documented by the American Congress of Obstetrics and Gynecology is... ongoing counseling throughout the pregnancy. There are no negatives outside of those associated with nicotine withdrawal for this method. [However,] often the resolve of the individual makes the difference regardless of method chosen." Other non-medicated options for quitting smoking while pregnant include hypnosis and acupuncture, but neither has been studied when it comes to pregnant women.

The latest product on the market boasting the ability to help you quit smoking is e-cigarettes, aka vapes. But, before you make the switch, it's important to discuss it with your doctor. "There is no clear evidence that e-cigarettes help with smoking cessation and the lack of FDA regulation has led to the use of... cancer-causing carcinogens," warns Philip McAndrew, M.D., Loyola University Health System physician and smoking cessation expert. "There are so many important safety questions we don't have answers to. E-cigarettes do not separate the nicotine from the oral fixation which is extremely important when a person is trying to stop smoking."

Why you shouldn't ignore gall bladder problems during and following pregnancy >>

When deciding how to quit smoking while pregnant, remember that there is no one-size-fits-all method. "Different methods are ultimately effective for different people," says Dr. Afriyie-Gray. "The important thing, however, is that quitting decreases low birth weight, preterm labor, placental problems and future respiratory problems for baby, as well as risk of multiple health problems for the mother." To put the odds in your favor when trying to kick the habit, it's a good idea to separate yourself when other people are smoking. An 'out of sight, out of mind' mentality can often go a long way.

How much caffeine is safe during pregnancy and breastfeeding?
Fasting while pregnant
10 Foods pregnant women should avoid