Should you wear a seat belt during pregnancy?

So do you really need to wear a seatbelt during pregnancy? They aren't very comfortable, they can be awkward to use when your belly is huge, and seem to don't fit very well -- not to mention that a lot of pregnant women worry that the belt itself could injure the baby in the event of a car crash. 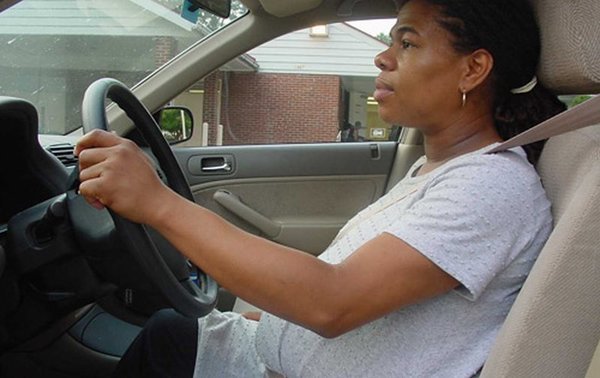 But doctors, researchers and accident investigators all agree: The best way for a pregnant woman to protect her baby in utero is to protect herself. So when you're on the road, wear your seatbelt every time -- and that means throughout your entire pregnancy (and even if it's a little uncomfortable sometimes).

Is it really safe?

A group of researchers led by Dr Stacie Zelman from Wake Forest University examined a national database of over two million injured patients, and found over 2,400 pregnant women injured in car crashes. Women wearing a seat belt, having an air bag, or both were significantly less likely to have pregnancy-related complications than women with neither a seat belt nor an air bag. (Not surprisingly, the combination of a seat belt and air bag resulted in the lowest rate of complications.) There is no evidence that safety belts

increase the chance of injury to the fetus, uterus, or placenta -- no matter how severe the collision -- agrees the South Dakota Department of Health. Your wee one is protected within a fluid-filled sac, inside the uterus... and the uterus is protected by bones, organs and muscles. In fact, they say that fetal injury due to pressure from the safety belt is rare, occurring in fewer than 1 out of 10,000 car crashes. The bottom line: Pregnant women should use seat belts with confidence that they will help, not hurt, in case of a car accident.

A seat belt during pregnancy how-to

So how exactly do you properly use a car's seat belt during pregnancy? Here are step-by-step directions.

1) Start by moving the front seat as far back as possible and adjust the seat's position as needed. (Your breastbone should be at least 10 inches from the steering wheel or dashboard.)

2) If possible, adjust the steering wheel so it is up and away from your abdomen.

3) Sitting as upright as possible, place the lap belt under your belly and as low on your hips as possible (so it pulls against your pelvic bones, not your abdomen).

4) Position the shoulder belt so it crosses your chest between your breasts.

5) Fasten and adjust the seatbelt so it fits as snugly as possible. (If the seatbelt isn't big enough, consider getting a seatbelt extender online or from your auto dealership.)

6) Remember to adjust your belt and positioning as you grow, always making sure to keep as much distance from the steering wheel as possible while still allowing you to reach the pedals and steer properly.

The American College of Obstetricians and Gynecologists suggests that expectant moms should always use both the shoulder and lap portions of the belt. Never slip the shoulder belt under your arm -- always make sure it is placed across your chest and fits between your breasts, and let the top part of the shoulder belt rest across your shoulder (but don't let it rub against your neck). If you need to, adjust the height of the top of the seatbelt on the post between the front and back doors.

Are car airbags safe during pregnancy?

And one more reminder

Now is also the time to get into some better driving habits, particularly in terms of avoiding distracted driving. That means be smart and safe -- don't talk on the phone, don't send/read texts, wait to consult your GPS and don't blast the music to 11 as you play air guitar -- while you're driving any vehicle. Logically, you know that that you might gain a little time and appreciate the convenience... but what you could potentially lose is infinitely more valuable. We'll leave you with a true-life taleLaura from Ohio experienced a life threatening car accident, and went into labor shortly afterwards. Both she and the baby survived -- a miracle.

My story is very unusual because it involved me being in a major car accident. I was 37 weeks and not showing any signs of delivering soon (although I was ready). I was driving 55, and I popped a hill and there was a truck in my lane. I hit him head on with the majority of the impact being to my front corner. I was scared that I was bleeding or my water had broke. Luckily I didn't notice anything. My son was transported to children's hospital and released. They had to use the jaws of life to cut me out. It took the medic all the way across my belly to find the heartbeat, but it strong when he finally found it. I was then transported to a hospital 45 minutes away which is the trauma center for our area. It is also where I was scheduled to give birth. When I got to the hospital, the first thing they did was get the heartbeat on the Doppler. That was the best sound I have ever heard.

Read the rest of her story right here.

Have belly, will travel
Are car airbags safe during pregnancy?