Sep 13, 2013 9:00 AM by Chaunie Brusie
Posted in Labor and birth / Labor and Delivery / Labor Induction
Rate this Article:
Tweet
Pin It 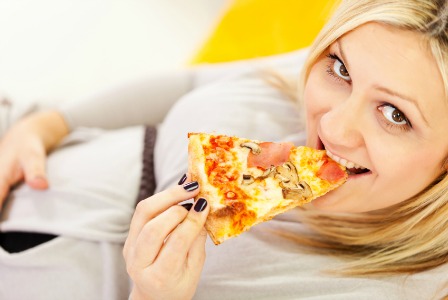 This time last year, I was desperate. So desperate to get my baby out already that I researched each and every last natural induction method known to woman. Castor oil? Nipple stimulation? The good old standby of having sex? Tried 'em all.

Coaxing your baby along… naturally

As any pregnant woman knows, the end of pregnancy can be extremely challenging. Every day you analyze every twinge, sneeze, and weird aches and pains, hoping and wondering if labor is about to start.

So is there a way to jump-start nature? Standing at the nurses’ station of the OB department where I worked last year, I polled my fellow nurses and came up with a list of some suggestions to help me induce labor.

Yes, it sounds weird, but the single most effective way to induce labor is to stimulate the nipples. Nipple stimulation works because it releases oxytocin from the brain, the same hormone that produces contractions. The problem with nipple stimulation is that it has to be constant and steady — you will need to stimulate the nipples until you feel a contraction, and then continue until contractions are regularly occurring every five minutes.

One nurse swore that stimulating her nipples put her into labor a week early with all three of her children. Desperate as I was, when I tried nipple stimulation (with the help of a breast pump applied every few minutes), I got tired of the length of time it took to produce regular contractions. So for me, while the stimulation did produce contractions, I couldn’t get them to come regularly enough to kick me into labor. Although this can be an effective method, never try it unless you run it by your care provider and especially not if you are earlier than 39 weeks pregnant. You might also consider running this method by your partner — he may be happy to, ahem, give you a hand.

What pregnant woman hasn’t heard that having sex is the best way to induce labor? Luckily, this one can help — not only because an orgasm can induce contractions, but because the prostaglandins in the sperm can help soften and dilate the cervix. Unfortunately, if you’re anything like me, sex in the last weeks of pregnancy is akin to torture and extreme embarrassment, so this one’s not for the faint of heart. Another dud.

After a friend told me that castor oil put her straight into labor, I did some research on this old method. Unfortunately, I learned that castor oil works primarily by increasing movement in the intestines — in other words, it attempts to empty everything out, including the baby. The thought of having to run to the bathroom every minute on top of going into labor just didn’t sit well with me, so I had to pass on the castor oil method too.

All of my efforts to end my pregnancy misery were in vain. I just knew I would be destined to be giant and pregnant forever. But there was one thing that I hadn’t tried…

The night before my due date, some family friends invited us over for some B.L.T. pizza and a movie night. Was it unconventional? Yes. Was it delicious? You bet.

But did it work?

That night, after consuming half of a pizza all my by myself, I went into labor. My son was born eight hours later.

Hey, it’s worth a shot, right?

More about labor and delivery

How to avoid a C-section
Prenatal classes: Worth it or a waste of time?
Labor and birth: By invitation only