Rashes, Eczema And Dermatitis, Oh My!

Get a handle on your baby's skin sensitivities with our go-to guide on typical — and some not so typical — infant skin issues. 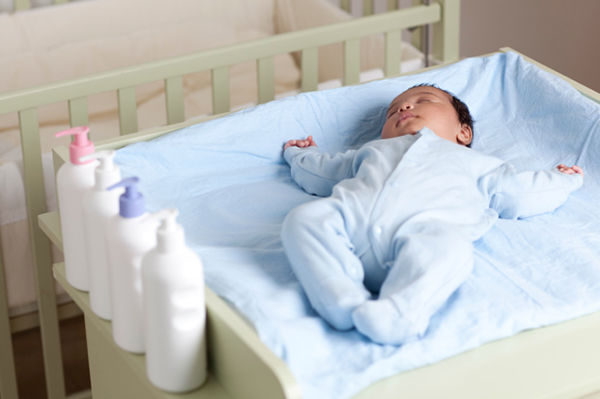 Dr. Purvisha Patel, owner and dermatologist at Advanced Dermatology & Skin Cancer Associates, says cradle cap (infantile seborrheic dermatitis), which generally only occurs in babies younger than 6 months, can appear other places than baby's scalp, including on his eyebrows, behind the ears or on the neck, cheeks and chest. She adds that cradle cap is often compared to dandruff because of its dry, flaky nature. "The cause of the dandruff is unknown, and it doesn’t normally cause discomfort to infants." While it often goes away on its own, Dr. Patel suggests washing baby's scalp daily with a gentle baby shampoo, and ensuring that it's completely rinsed out.

Dr. Patel describes Intertrigo as "an irritant dermatitis that often surfaces as a red, raw and sometimes oozing rash that is found in babies’ skin folds, primarily in their chin and neck areas. It is caused by excessive moisture — normally from excessive drool or spit-up — that has collected in your baby’s skin creases that are not directly exposed to air. This rash can lead to bacterial and fungal infections and should be monitored regularly."

Dr. Patel advises keeping the area as dry as possible by blotting the rash, but never rubbing it. She also suggests using a hair dryer on a low setting with cool air to dry the irritated spot. "We do not recommend applying ointments, which can lock in moisture and encourage the development of a bacterial infection," she adds.

What new parent isn't familiar with diaper rash? This common rash is "most often caused by infrequently changed or continuously wet diapers, but can also be a result of antibiotics, bacterial or yeast infections or new foods," says Dr. Patel. "Prevention is better than trying to cure it, but certain creams can help." Dr. David Bank, a board-certified dermatologist, author of Beautiful Skin: Every Woman's Guide to Looking Her Best at Any Age and founder and director of The Center For Dermatology, Cosmetic & Laser Surgery adds, "I recommend A&D ointment or Desitin. If the rash is getting very red or yellow and crusty, follow up with your pediatrician or dermatologist as there may be fungal/yeast which is not uncommon."

Dr. Bank describes this as a "genetic condition where skin cells are not shed from hair follicles. This often occurs on the sides of the face and the arms and can be treated with glycolic acid cleanser or salicylic acid cream."

Another common skin rash Dr. Bank sees in his infant patients is fifth disease caused by a virus which can be passed from child to child. "It's rare in infants but more prominently seen in school-age children," he says. "It looks like 'slapped cheek,' giving the appearance of bright red cheeks. It is spread through the air — when the infected person coughs or sneezes. By the time the rash appears, children are no longer contagious," he adds. "There is generally no treatment for fifth disease, the rash dissipates on its own. However, if the rash is itchy, antihistamines can be used or anti-itch cream."

Dr. Bank describes eczema as a slightly dry, scaly skin and says it should be treated with an over-the-counter moisturizer and 1 percent hydrocortisone. "Some children with eczema are sensitive to dairy, so it might be worth asking the pediatrician about excluding dairy from the diet temporarily to see if this makes a difference. Fortunately, the majority of kids grow out of their eczema at the onset of puberty, when the skin becomes thicker and more oily," he adds.

Dr. Heather Woolery-Lloyd, co-founder of Specific Beauty, describes this rash. "Looks like red bumps on the face or arms or chest and is more common in the summer when babies might be swaddled and skin is occluded. It occurs when sweat gland ducts get plugged due to dead skin cells as trapped sweat can lead to an itchy rash," she says. "To treat this rash, she suggests dressing baby in loose cotton clothing and keeping baby's environment cool. Most often the case will resolve itself, but for more severe cases a trip to the doctor or dermatologist may be necessary.

Dr. Woolery-Lloyd describes this rash as dry, scaly pink patches on the skin most commonly on the arms in the crease of the elbow and on the legs behind the knees and on the shins. She explains, "It usually runs in families and is associated with other allergic conditions like asthma and hay fever." To treat the condition she suggests using mild cleansers on Baby such as Cetaphil, CeraVe or Vanicream, using proper bathing techniques (once daily, short tepid baths less than 5 minutes, pat dry and apply moisturizer like Aquaphor ointment) and topical cortisone creams.

Those little white bumps on baby's precious skin really are tiny whiteheads, or milia, which are caused by left-behind maternal hormones that cause baby's oil-producing glands to over produce and become plugged. Using a gentle cleanser on baby's skin — never a harsh acne products for teens — should help clear up baby's pimples.

More on newborns and babies