Decay in baby teeth on the rise 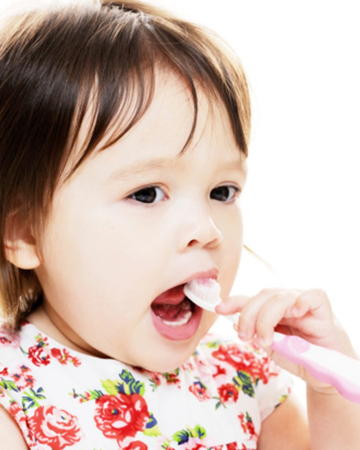 Prevent cavities in your baby's teeth

New statistics reveal the alarming amount of tooth decay that is happening in kids' first teeth. It is among the most common diseases of childhood — but it can be prevented.

The most common disease in infants is...

You guessed it — tooth decay. The American Academy of Pediatric Dentistry's (AAPD) recently released "State of Little Teeth" report defines early childhood caries (ECC) as a rapid form of tooth decay that is on the rise and can cause lasting harm to not only your child's oral health but his general health as well as his social and intellectual development.

AAPD president Dr. Warren Brill says, "These statistics are alarming because of the critical role of baby teeth in helping children speak clearly and chew naturally, and also [in] helping to form a path that permanent teeth can follow when they are ready to erupt."

Dr. Brill attributes the epidemic of decay in little teeth to delaying the first dental visit, putting children to bed with a bottle and poor diet and eating habits.

Brent Cornelius, DDS, who runs a private dental practice in Keller, Texas, adds that putting a baby to bed with a bottle of milk or juice contributes to tooth decay because, "Once asleep, the last drink remains in the baby's mouth all night causing decay." He says other contributors to infant tooth decay are honey on a pacifier ("a terrible idea for obvious, sugary reasons"), and "the advent of the sippy cup. A child carrying a sippy cup of anything but water is a cavity waiting to happen."

Julie Dimock, a pediatric dentist at Dimock, Weinberg & Cherry in Wilmington, North Carolina, says that breastfeeding at will during the night can also be to blame for the rise of infant tooth decay. Dr. Dimock says, "Breast milk contains sugar. The frequent contact of the breast milk to the baby's teeth will also cause early childhood caries when not wiped off the teeth." She also notes that offering a bottle of milk or juice throughout the day "increased risk of decay by increasing the number of acid attacks to the teeth."

Dr. Cristelle Rodriguez of Nova Children's Dentistry says after breast or bottle feeding baby, "Look for the white film [that] forms over the tongue and on the gums and try to remove it gently. This film is plaque, which harbors caries-forming bacteria."

It is 100 percent preventable in fact, according to Dr. Brill. He offers the following AAPD recommendations to ensure your children have a "happy, healthy smile for a lifetime."

More on care for baby

The importance of brushing your baby's teeth
The top 5 infant ailments
Your baby's first year in checkups, explained