Why rice cereal for babies is totally outdated

Put That Spoon Down, Folks!

Think all babies should be started on rice cereal for their first solid meal? Think again. Based on recommendations from the American Academy of Pediatrics, your baby's palate is about to get a whole lot more sophisticated. 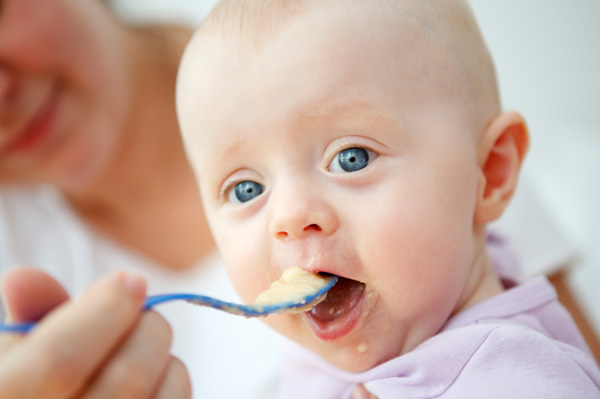 While I know a lot of mothers who started their babies on rice cereal fairly early on in life — some even as young as 3 months, mixed in with their formula — I have to confess that I never got around to starting my daughter on that standard traditional baby food.

Like a lot of instances in motherhood, somehow I blinked and my daughter was almost 7 months old. What the... ? By then, when I brought home the finest all-natural, organic, brown rice cereal that nature could provide in box, she wanted nothing to do with. No, thank you.

Instead of pushing it, we simply skipped over the whole watery-rice mixture and dove right into table foods. She happily joined her father and me at the table like a big girl, and ate sweet peas and bananas for the majority of many months.

So, when the next two kids happened along and followed suit after their big sis (by not really showing a great love for rice cereal), I decided to skip it. Instead of starting them on solids as soon as possible, I just waited it out. I nursed them exclusively until they started to show interest in food (reaching for it in the high chair, smacking their lips, etc.) and then started them directly on pureed vegetables and fruits.

The system seemed to work for us and I really didn’t think much of it, until lo and behold, I came across an article by the American Academy of Pediatrics (AAP) that described how rice cereal really isn’t recommended as the first solid food for babies anymore.

According to the AAP, “For most babies it does not matter what the first solid foods are. By tradition, single-grain cereals are usually introduced first. However, there is no medical evidence that introducing solid foods in any particular order has an advantage for your baby.”

Basically, the doctors on the AAP’s committee explained that giving rice cereal as a first food to babies is more of a social and cultural norm that’s not really necessary anymore. In fact, because rice cereal is low in nutrients and high in carbohydrates, it may actually be a less-than-ideal first food choice.

You mean for once, my lazy mom ways were actually not wrong? Score!

The rest of the recommendations from the AAP on introducing a baby to solid foods are as follows:

More about feeding your baby