Will circumcising your son ruin his sex life later? 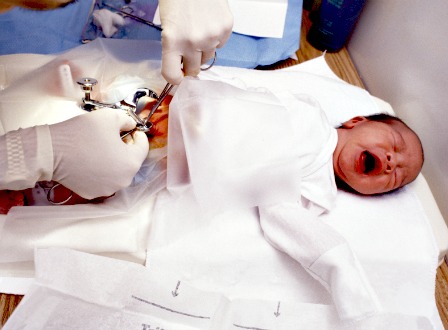 Having a son means having to dive into the circumcision debate, but the latest study may have you wondering if circumcising your son may ruin his sex life later. Before you decide whether or not to snip, discover the study results and the benefits versus risks of circumcision.

In a debate that is as sensitive as the organ in question, parents across the world are faced with a big decision: Should you circumcise your son? While the circumcision debate is pretty evenly divided — approximately half of the men in the United States are circumcised — researchers in Belgium took their investigation to the bedroom.

At train stations across Belgium, leaflets and advertising urged men ages 18 and older to go online and answer survey questions in the pursuit of answers on how circumcision really affects the male population when it's time to hit the sheets. The research conducted by Dr. Piet Hoebeke from Ghent University Hospital asked the 1,369 male respondents to rate the intensity of their orgasms and sensitivity of their penis. The 0 to 5 scale asked the 1,059 uncircumcised and 310 circumcised men to grade their sexual pleasure and orgasm intensity, as well as the effort required to reach the finish line. But depending on who you ask, the findings may not really be considered risks.

Find out why more families are choosing not to circumcise >>

Results of the study showed that more circumcised men reported decreased sexual pleasure and lower orgasm intensity, as well as unusual sensations such as:

The Belgium study also testifies that circumcised men experience less intense orgasms as well as reduced sexual pleasure. But, this isn't a first for the circumcision debate. The German Academy for Pediatrics asserts that circumcision can lead to erectile dysfunction as well.

However, the American Academy of Pediatrics (AAP) released a statement in 2012 that new scientific evidence weigh in favor of the benefits versus risks of newborn circumcision. According to the AAP, the benefits of circumcision include lower risks of:

Research shows that circumcision even lowers the risk of cervical cancer in sexual partners. And, while the AAP does state that the decision of whether you should circumcise your son is up to you, many doctors stateside are all for removal of the foreskin at birth. "I believe that circumcision is best for the male child," states pediatric nurse practitioner Michelle Waddy M.S., R.N.. "It can prevent urinary tract infections, kidney infections and infections to the foreskin. It also prevents phimosis — this is the inability to pull the foreskin back to clean the penis."

Learn why circumcision bans opposed by the AMA >>

Still wondering if circumcising your son will ruin his sex life later? Let's face it — the Belgium study showed only a slight difference in sexual satisfaction between circumcised and uncircumcised men. But, whether you're opting to remove your son's foreskin because of religious or social reasons or opting to let your son grow up uncircumcised, it's important to know the key fact behind each side of the circumcision debate — from the risks of circumcision to the benefits — long before your bundle of joy arrives.

Should you circumcise? The experts weigh in
Circumcision cons: should your baby boy be circumcised?
Debating circumcision