Learn How To Help

Learn the symptoms and the best ways to remedy these conditions that are common in babies, ranging from spitting up to diarrhea. 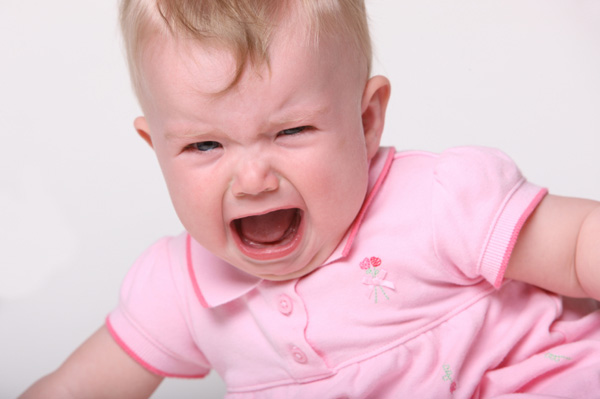 Experts say spitting up, also known as acid reflux, is perfectly normal after your baby feeds or when he burps, coughs or cries. “Spitting up occurs in more than half of all infants up to 1 year of age,” says Richard So, M.D., a pediatrician at the Cleveland Clinic Children’s Hospital in Ohio. “Babies mainly spit up due to immaturity of the valve between the esophagus and stomach.”

What can parents do? Take preventive measures: Burp your baby every five minutes during bottle feedings or after each turn on a breast; feed smaller amounts, but more often; keep your baby upright for up to 45 minutes after feedings; avoid too-tight diapers; use the right bottle nipple size for your child’s age (fast flows may provide too much liquid; slower flows can lead to more vigorous sucking and too much air intake).

When your infant has colic — defined as crying for more than three hours a day, three days a week for more than three weeks — most likely you and your partner are the ones who are suffering most. The condition is normal in many babies and, thankfully, usually goes away on its own by the time your baby is 3 to 4 months old.

What can parents do? There’s no magic solution, unfortunately. Experts say different tricks work for different babies. Pediatrician and child development specialist Harvey Karp, M.D., believes that some babies cry a lot because they are not yet accustomed to all the new stimuli in their first few months of life. He suggests trying five distinct actions in tandem, a technique he dubs the 5 S’s (including swaddling).

Upper respiratory infections with runny nose, congestion, cough and perhaps fever are very commonplace. “Sometimes, babies get eight to 10 colds in one season, even more if the baby is in day care,” says Alison S. Tothy, M.D., medical director of the pediatric emergency department at the University of Chicago Comer Children’s Hospital in Illinois.

What can parents do? Antibiotics do not work against cold viruses, so you’ll need to treat symptoms. Some simple remedies: Try a cool mist vaporizer for cough and congestion, saline drops for a stuffy nose and lots of TLC for crankiness. If your baby has a fever, call your pediatrician, who may suggest acetaminophen or ibuprofen.

What can parents do? First, remember that bowel habits can change when your baby switches from breast milk or formula to whole milk and when she starts eating solids. If your baby remains constipated during these transitional feeding phases, try puréed pears, apricots or prunes or a few ounces of prune juice in a bottle. You can also switch to whole-grain cereals like barley and oatmeal, which have more fiber than rice cereal. If the constipation won’t go away — or has nothing to do with feeding transitions — call your pediatrician.

Watery stools are more worrisome than constipation. Diarrhea can be caused by something you ate if you’re nursing or if your baby has an infection. You’ll need to watch for dehydration if your baby has more than five to eight watery stools in eight hours. “Signs include crying without tears, not peeing as much or eyes that look sunken,” says Tothy.

What can parents do? If your baby is younger than 1, always call your pediatrician. You may need to rehydrate your baby with an electrolyte solution like Pedialyte. Water does not contain electrolytes, minerals such as sodium and potassium that are needed for cell function, and juice may exacerbate the diarrhea.

>> Nancy Gottesman is a health and nutrition writer in Santa Monica, California.