How much caffeine is safe during pregnancy and breastfeeding?

Find Out How Much Cafffeine Is Safe To Consume During Pregnancy And Breastfeeding, Including A Chart Of How Much Caffeine Is In Drinks And Foods.

For some lucky women, caffeine is a take-it-or-leave-it extra. But, for some mom-to-bes, lifting their heads off the pillow and not partaking in that morning cup o’ joe is a tough habit to break. If you have pregnancy caffeine concerns or are looking for insight on caffeine during breastfeeding, here are some tips and guidelines for the safe consumption of caffeine while pregnant or nursing. 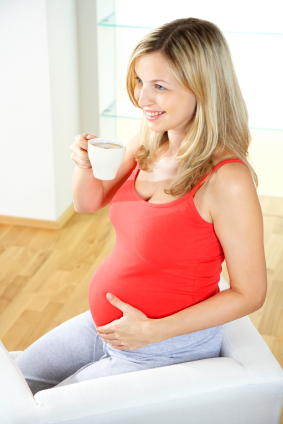 Concerned about the affect of this jitter-inducing element on your growing fetus? Some studies have shown that consuming caffeine during pregnancy can:

So, how much caffeine is safe to consume when there’s a bun in the oven?

Safe amounts of caffeine
The topic of caffeine consumption during pregnancy is still a little controversial within the medical community, but, “Most physicians agree that modest consumption of caffeine is fine,” advises Dr. Ringland S. Murray, MD, Reproductive Endocrinologist and Infertility Specialist Tennessee Reproductive Medicine.

The magic number? Try to cap caffeine use to 200-300 mg per day. “Study results are not entirely consistent; however, most studies show that more than 300 mg/day of caffeine is associated with a 2-fold increased risk of miscarriage,” stays Dr. Murray.

According to our source, one regular 8 oz cup of drip coffee generally contains between 104-192 mg of caffeine, so stick to 1-2 cups per day. Decaf brewed coffee is a better bet, only containing a little caffeine, at 3-4 mg per cup. Iced tea contains 70 mg per 12 ozs (2-4 large 12 oz glasses is safe per day) and brewed tea contains 20-90 mg in 8 oz. Check the labels on tea to find out the exact caffeine content for your specific tea.

Hidden sources of caffeine
Did you know that coffee shop brews contain a lot more caffeine than home brewed coffees? Yet, drinking a cup of coffee or your favorite cola and you know that you are in for an “energy boost.” But, some of your favorite treats may be hiding a little secret: they contain caffeine, too!

Here are some other caffeine-containing foods and drinks:

Caffeine and breastfeeding
When consuming caffeine while breastfeeding, your baby gets a dose in the breast milk. Because an infant’s liver cannot break down or get rid of caffeine, may accumulate in his tiny body over time. The caffeine can make both you and Baby a bundle of nerves instead of a bundle of joy, causing irritability and sleeplessness.

However, less caffeine reaches your baby during nursing than reaches your baby during pregnancy. According to Dr. Murray, “…during pregnancy caffeine freely crosses the placenta, but relatively little makes it into breast milk. A study by Ryu (Developmental Pharmacologic Therapy) showed that women who consume 750 mg caffeine per day secrete on average 4.3 micrograms caffeine per milliliter into breast milk.”

Kicking the habit
Caffeine is an addictive element, so expect withdrawal symptoms such as headaches, sluggishness and irritability. Try these tips to help you kick the habit:

-Cut down the amount you drink over the course of a week
-Switch to decaf, but remember that decaf does not mean caffeine-free
-Trade your favorite treat for a lower-caffeine substitute

It’s important to note that food and drink manufacturers only list caffeine if it has been added to the ingredients list. Naturally-occurring caffeine won’t be on the label. So, if given the green light by your doctor, make sure to brush up on the caffeine contents of what you’re eating and drinking and remember that the key is moderation!

For more on pregnancy health and nutrition:

-Are artificial sweeteners safe during pregnancy?

-Medications during pregnancy: List of safe and unsafe drugs