Many parents have heard a lot about autism in the news, but may be unaware as to the early warning signs that start around six months of age. Find out why early diagnosis and intervention can help autistic children reach their full potential.
By Vicki Salemi 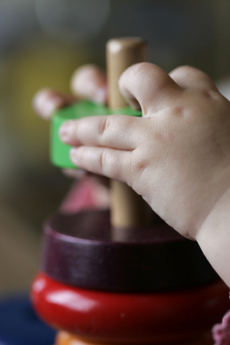 Characterized by impaired social interaction, communication and restricted and repetitive behavior, this disorder starts before a child turns three years-old.  Scott Barkin, executive director of Block Institute which provides educational services to children with special needs such as autism, notes a few warning signs can be picked up by parents to aid in early diagnosis.

Early warning signs
Warning signs to be aware of include delays in receptive and expressive language skills evident by eighteen months of age or a sudden regression noted in language/communication skills.

As early as ten to twelve months of age signs start to manifest themselves. “Lack of communicative intent or purposeful attempts to communicate or gain attention," says Barkin.  Another sign, he says, is poor eye contact and poor relatedness where your child doesn’t respond to familiar people in consistent ways as early as six to eight months old.

Laura Corby, founder and CEO of the Autism Solution Center, Inc. says, “Early diagnostics and intervention are absolutely critical components for a positive outcome when dealing with autism spectrum disorders (ASD's).” That said, it’s important to remember that each child is different. “These children are as individual as their fingerprint. Though they most definitely carry many common characteristics, you can line 200 of these children up ear to ear, and not two of them will be the same, which makes identification a difficult proposition.”

Intervention
Keeping in mind your child may be misdiagnosed (either has autism and it’s not detected or doesn’t have it and is told he/she does), if we’re assuming the diagnosis is indeed correct, there are intervention options. Again, as every child is different the intervention types and intensity will vary by child.

Once the child takes an ABLLS (Assessment of Basis Language and Learning Skills, www.behavioranalysts.com), experts may have a comprehensive view of the child’s functioning levels in all areas. Once scores are tabulated, areas of deficiency are clear so professionals can determine the level of intervention based on the severity of the delay.

Corby notes, “I am a firm believer that a “multi-modal” approach is the best. The children who incorporate numerous therapies in addition to biomedical and dietary interventions seem to have the best responses. If you consider that autism is a bio-neurological disorder that has behavioral outcomes (meaning that it’s not simply psychological, there are neurological and biological components involved as well), it’s clearer to see that not only behavioral interventions are needed to address the issue.”

Her advice? Become an expert. “If you don’t understand what your child needs, how will you be able to identify inappropriate approaches? Read every book and learn everything you can regarding autism and current interventions. Talk to everyone you know who has knowledge about the subject. Join online autism discussion groups and participate often. Most parents I know have learned the greatest amount about autism from other parents, but remember, just because it worked for little Johnny, doesn’t mean it’s what’s appropriate for your child. Seek multiple professional opinions to determine issues and needs. Do your own research and find out what works for your child, then make sure it’s put into place appropriately.”

One on one interventions
In fact, intensive one-on-one interventions may be recommended to bring deficiencies to age appropriate levels as quickly as possible. “When this happens, and it happens often, the children can participate in a regular environment with very few, if any, supports. This not only saves the system a great deal of money, but it also provides our kids with a shot at a normal life!”

Above all, it’s crucial to remember that each child is different. Some children as early as two years old go to a center for individual treatment.  Corby explains, “Biomedically speaking, every individual’s system is incredibly different, which is why it’s important to seek professionals who are highly skilled in investigating these issues as they relate to autism. There’s no magic bullet in autism treatment, but there are many advances that have brought hope and success to many.”