Screen Time Isn't Evil, But Too Much TV And Computer Time Can Create Problems For Kids.

I'm actually not the type to limit TV or computer time. My point of view is that kids should be... 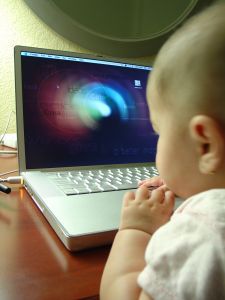 I'm actually not the type to limit TV or computer time. My point of view is that kids should be encouraged to play outside or play with toys, but that some TV or computer time won't harm them. Kids learn all sorts of way, and using the television and computer is one of those ways. However, I'm not on board with excessive anything and that includes screen time. I don't think it's healthy. Now, researchers from the University of Bristol's Centre for Exercise, Nutrition and Health Sciences, England report that I'm not too far off - too much screen time can be unhealthy. The new research, published in the American Journal of Pediatrics notes that a child who spends at least two hours a day in front of a TV screen or computer monitor (and that counts homework time) has a significantly higher risk of developing psychological problems, no matter how much physical activity they might engage in. According to the research kids who were the most physically active, yet still banked a lot of screen time, appeared healthier than their sedentary peers in terms of emotional development and peer problems, but actually fared worse in behavioral areas, such as exhibiting more hyperactivity. This study assessed over 1,000 kids aged ten and eleven years. Researchers collected info on their screen time, their level of physical activity and their mental health. After running the data it was concluded that regular prolonged exposure to any sorts of monitors or screens increased a child's risk for psychological problems, and oddly exercise did not appear to get rid of the problem. As a final recommendation the study authors believe that limiting a child's screen time to fewer than two hours a day could play a valuable role in protecting the child's current and future mental health and well-being. It's best to set up your child to be healthy from the start, which means encouraging outside active play and other developmentally appropriate playtime that doesn't involve screen time. If you're not sure how to keep your little one busy read plan the perfect 24 hour baby schedule. *Source