WTF?! - 81 percent of babies have an online footprint

With So Many Kids Online And Plugged Into Technology Are We Losing Sight Of What A Real Childhood Is All About? 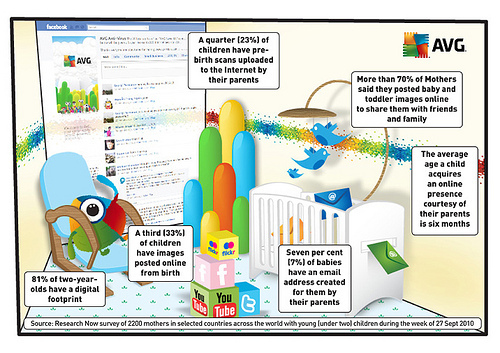 Wow. Actually online babies have popped up before. Back in 2007 I posted about a two-year-old with his own website. His mama had been using said site to spout off about how incredibly smart her baby was - up to typing on his own site (at 2 years!) - um, right. But I digress. My point is that this really surprised me in 2007, and a baby with a major online presence still kind of surprises me now. 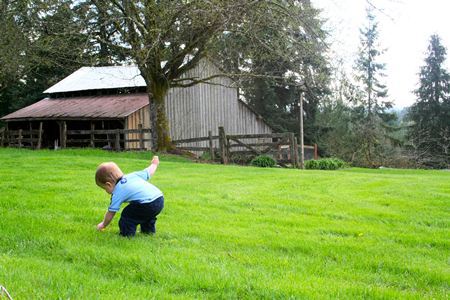 As a blogger I guess online kids shouldn't surprise me, but come on; when people are talking about toddler Twitter toys (joke or not) it's gone a little too far. Other research shows that parents are even purchasing their baby’s domain name, Facebook and Twitter names before their child has even been born. Is this just a wee bit nuts? Really, it makes me insane even to see how much kids text. I see eight-year-olds texting, parents who allow little kids to text at dinner and much more. It's obnoxious. In case you think it's normal and healthy for kids to be so plugged in to online media and other electronics, here are some sobering figures to consider... Not enough? Consider that this is officially the very first generation ever with a predicted shorter life span than their parents - and research sites obesity and lack of activity as the cause. Does my nine-year-old have a cell phone. Hell no. He doesn't have an illegal Facebook account, he's not tweeting or Linked In or hanging out on MySpace. Why? Because I want him to have a healthy childhood. Kids should be playing outside, running around and otherwise experiencing life. They do not belong plugged into every single online opportunity there is. Electronics and the Internet have made life today very different, in some ways yes, better. I don't think it's bad to post your kids pictures so friends and family can see. I don't think it's bad to teach your kids to smartly and safely use the Internet. TV is not the devil. I get that kids won't zone out if they have some access to electronic experiences. All that said, we need to use common sense if we want to raise healthy kids and part of that common sense is knowing that kids need other things first, before technology, things like fresh air, activity and human connections, not simply online pals. Also see: What do you think of babies with online accounts? Do you think all of these expanding technology opportunities benefit kids or not? Image via www.avg.com.