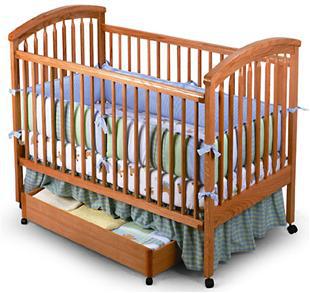 The crib's tubular metal mattress-support frame can bend or detach and cause part of the mattress to collapse, creating a space into which an infant or toddler can roll and become wedged, entrapped or fall out of the crib. CPSC has received a report of a one-year-old child from North Attleboro, Mass. who suffocated when he became entrapped between the crib mattress and the crib frame in April 2008. CPSC is aware of 13 additional incidents involving the recalled cribs collapsing due to the metal mattress- support frame bending or detaching, including one child entrapment that did not result in injury, and one child who suffered minor cuts to his head when his mattress collapsed and he fell out of the crib. CPSC staff urges parents and caregivers to stop using these cribs immediately and find an alternative, safe sleeping environment for their baby. Do not attempt to fix these cribs. All Simplicity drop-side cribs have previously been recalled for a hazard involving the drop side and Simplicity drop-side cribs could still be in use by parents or caregivers who are unaware of the recalls or by those who received a repair kit to immobilize the drop side from Simplicity when the firm was still in business. Check the chart below to see if you have one of the affected cribs... 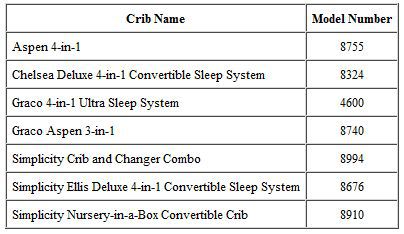 Some model numbers are followed by letters, indicating the color or finish of the crib. The name "Simplicity Inc." or "Simplicity for Children" appears on a label on the crib's mattress-support frame and/or the crib's end panels. The cribs were manufactured in China. Learn more. What to do: Stop using these cribs right now! The recalled cribs were sold at Walmart, Target, Babies R Us and other stores nationwide for between $150 and $300. Consumers should contact the store where the crib was purchased to receive a refund, replacement crib or store credit.